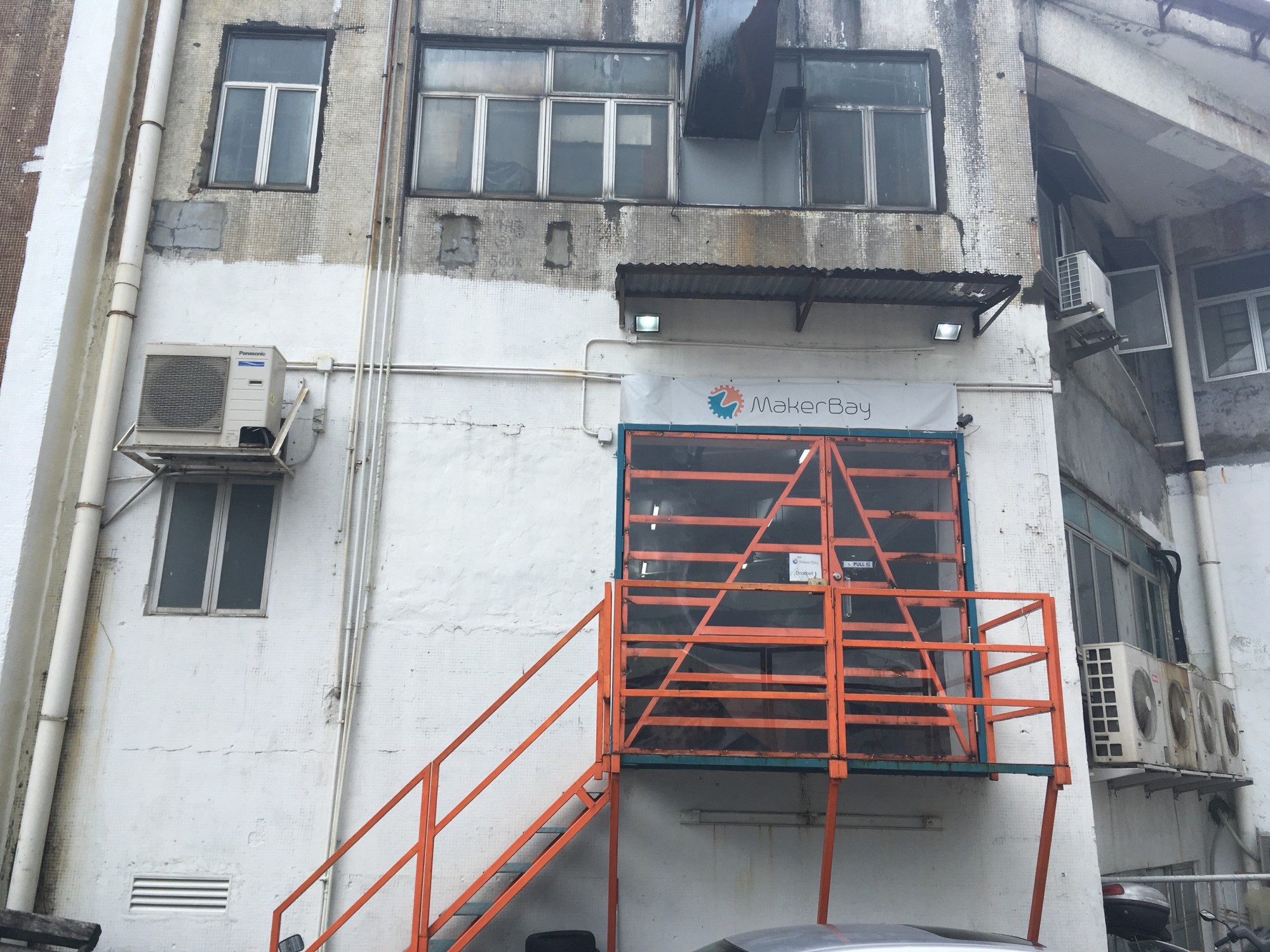 As the plans of the whole CHIC was changing day by day, we ended up visiting Makerbay twice. Luckily if I would have had to pick a place to visit twice, I would have picked this one. First time it was just Tabea and me, snooping around, trying to distract some people from their work so that we could learn about the place and the projects they are doing, the second time it was having drinks, pizza, some networking and our first public pitch. 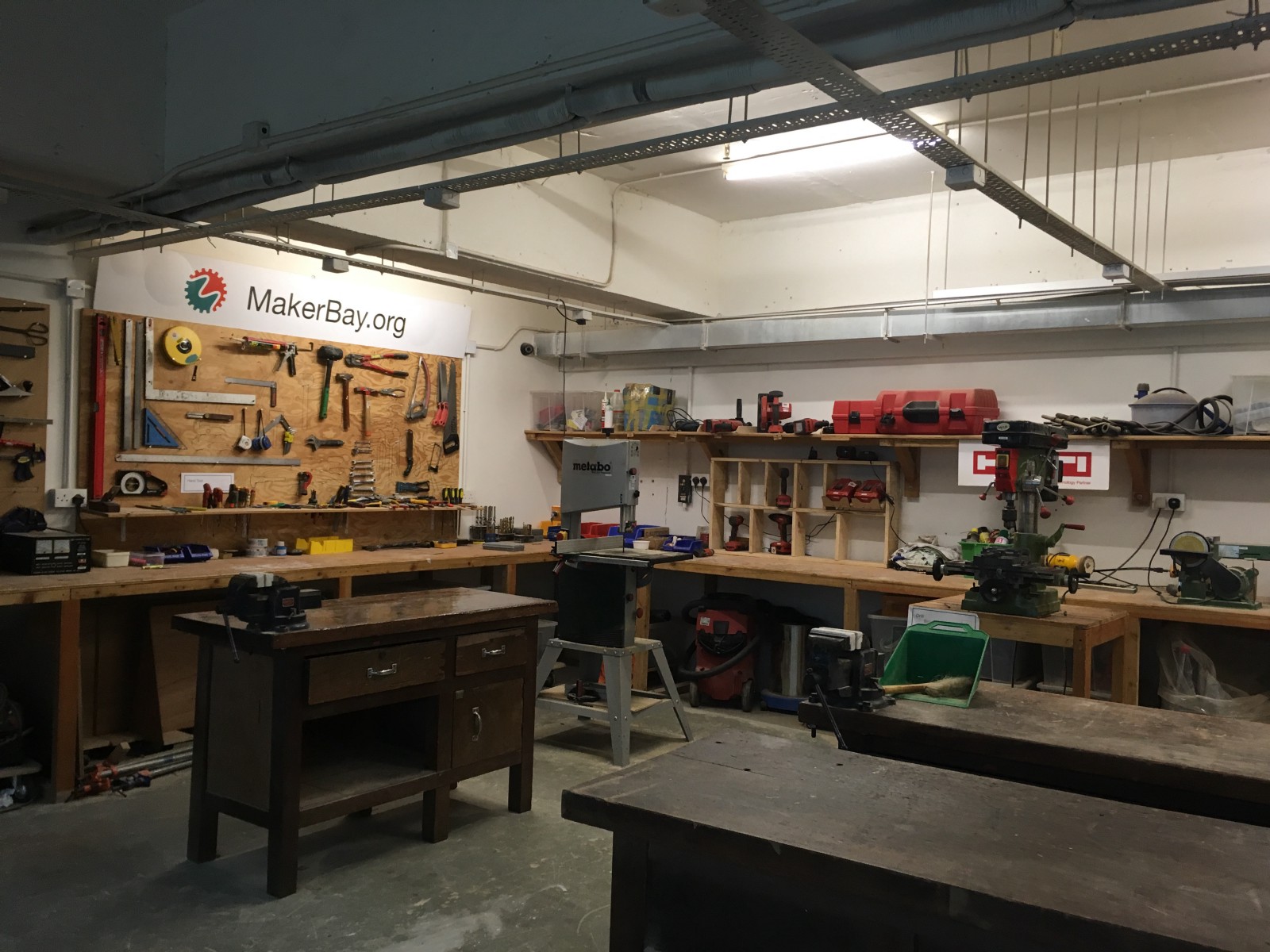 Makerspaces are public workspaces. The root concept is that makers get access to machines and working space for a membership fee, otherwise they could afford neither of them. Here they can have a desk in a co-working space and quickly complete and test prototypes. In reality it is much more though: a center for education, exchange of skills, social network and sometimes collaborations. By default, these spaces bring together people from different backgrounds, unlike big companies with specialised departments. Here individuals can realize their projects in a helpful and nurturing environment. Not all makerspaces are the same, for example Makerbay’s projects are aligned with its mission: environmental and social impact. They often research a question or design a solution in these domains. 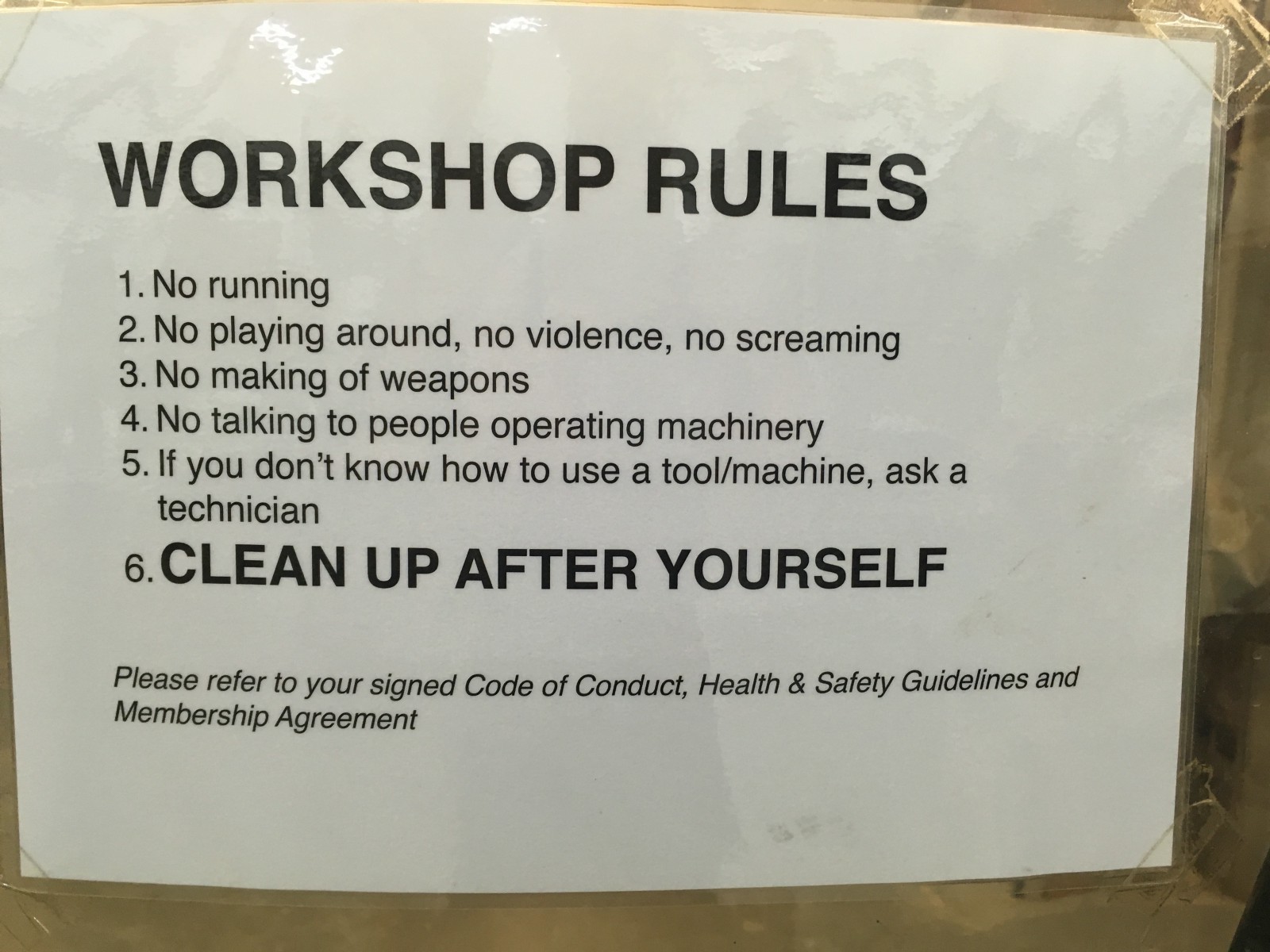 Can we extend rule 3 to other places? Like the planet?

This space is also special because most of the machines are owned by the founder. One would think that this model is not financially sustainable, and I assume they do have to make sacrifices, but it is in positive balance now for more than a year, even though these projects are not most local investor’s professional dream (which is probably reflected in their expectations and involvement). 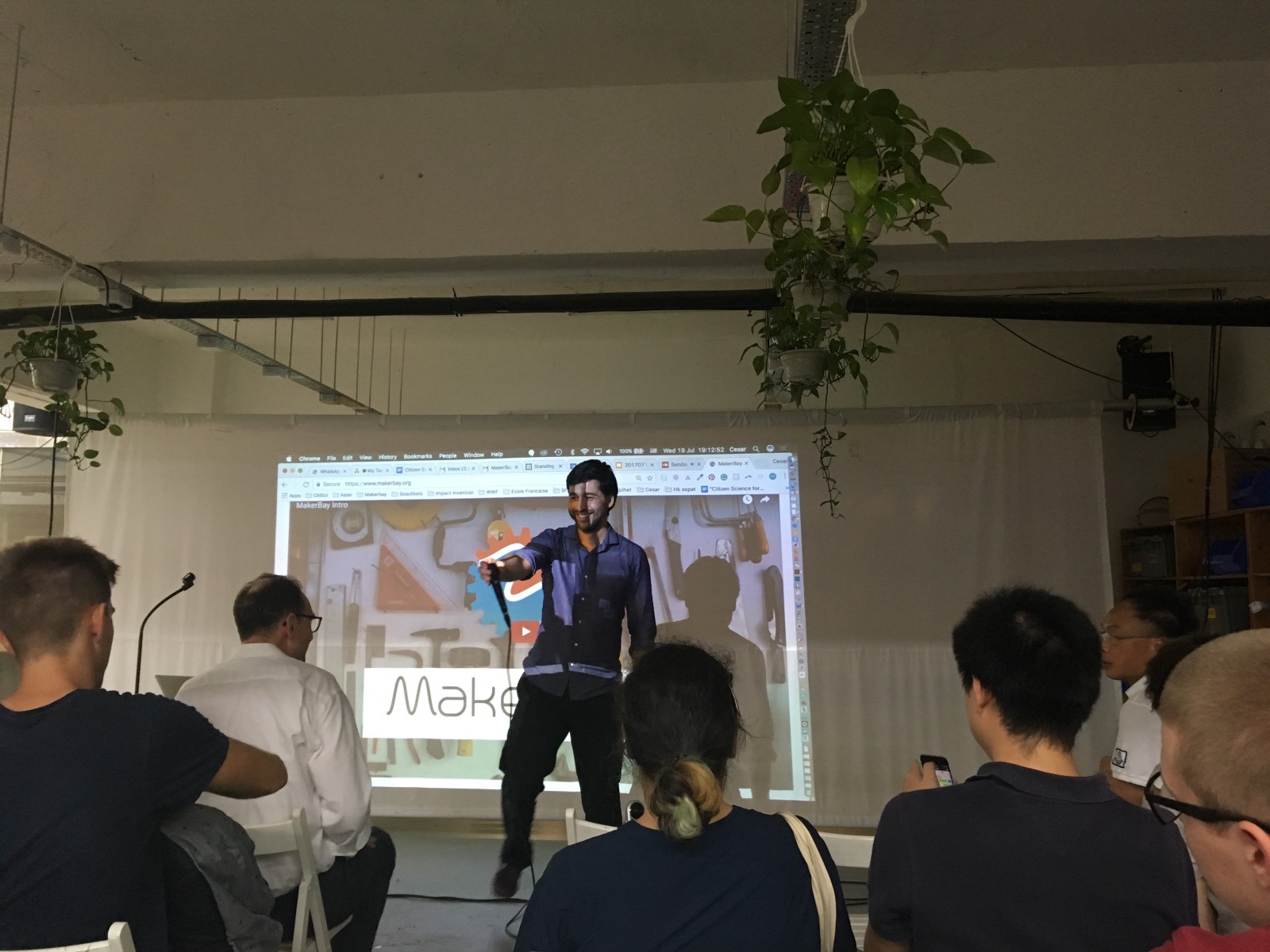 The founder is Cesar Harada, who is probably one of the busiest (and productive) people I have met, it was exhausting just to listen to all the work that he is doing for and next to Makerbay. His deep and genuine commitment was easy to feel when local makers presented their project and he took some of the questions, especially the ones regarding the business model and long-term plans. I still don’t understand why he spent more than half an hour of his time just to talk to Tabea and me when we first went there, but I’m happy he did. We also found out a lot from the enthusiastic students and interns working there. 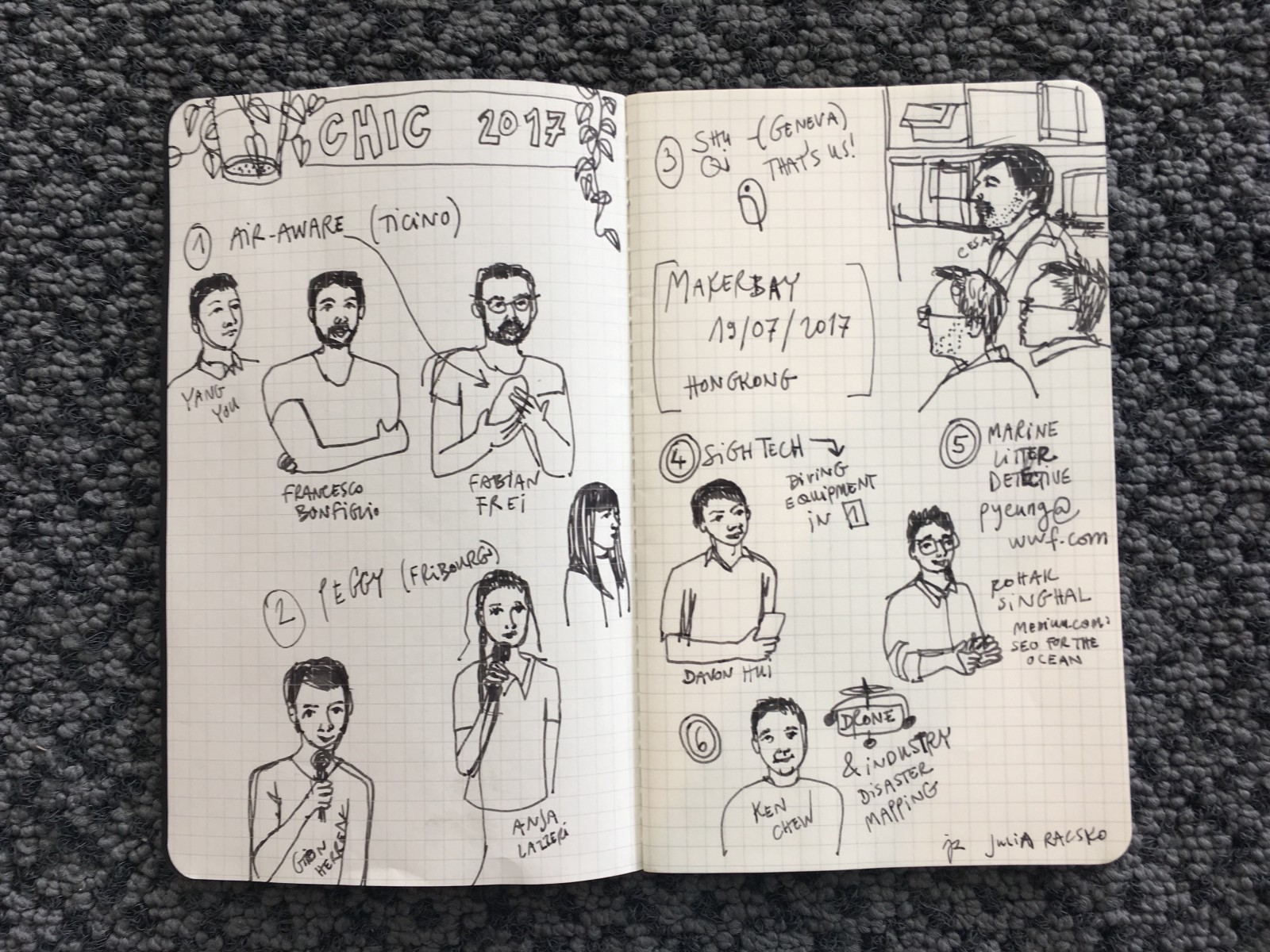 It was quite a long pitching session as our 3 teams and 3 local teams also presented their projects. Their initial brief and therefore the measure of success is different from ours, since for some teams the main goal is research or solving an environmental problem. As a result, profitability comes at a later stage. Right now these projects are mainly funded through sponsoring, e.g. from WWF. Makerbay’s profile is more focused on projects with social and ecological impacts and less on quick growth. One example is the marine litter detective balls, floating in the ocean ([link here[(https://medium.com/@krohak/seo-for-the-ocean-64f96f68a7e4)). 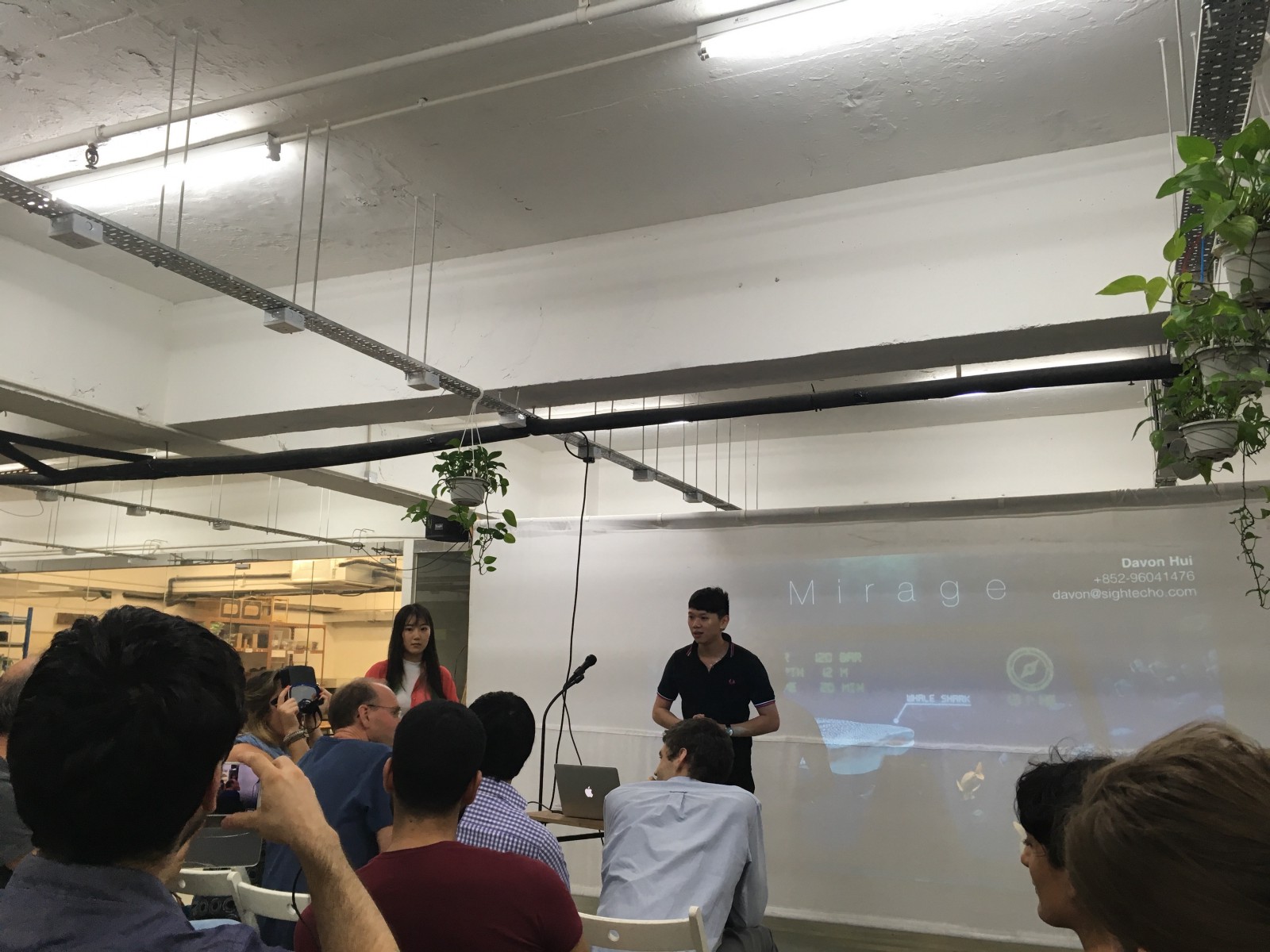 This was another team, working on diving equipment

Makerbay has the usual machines of makerspaces like laser cutters and 3D printers. Then there were more traditional tools like sewing machines, and there is the cutting edge technology in the biochemical lab. What I also found particularly interesting was the material library with unusual natural materials, e.g. mycelium, the moldable mushroom which solidifies when placed in the oven. The members of Makerbay are experimenting with these materials’ properties and possible usage. 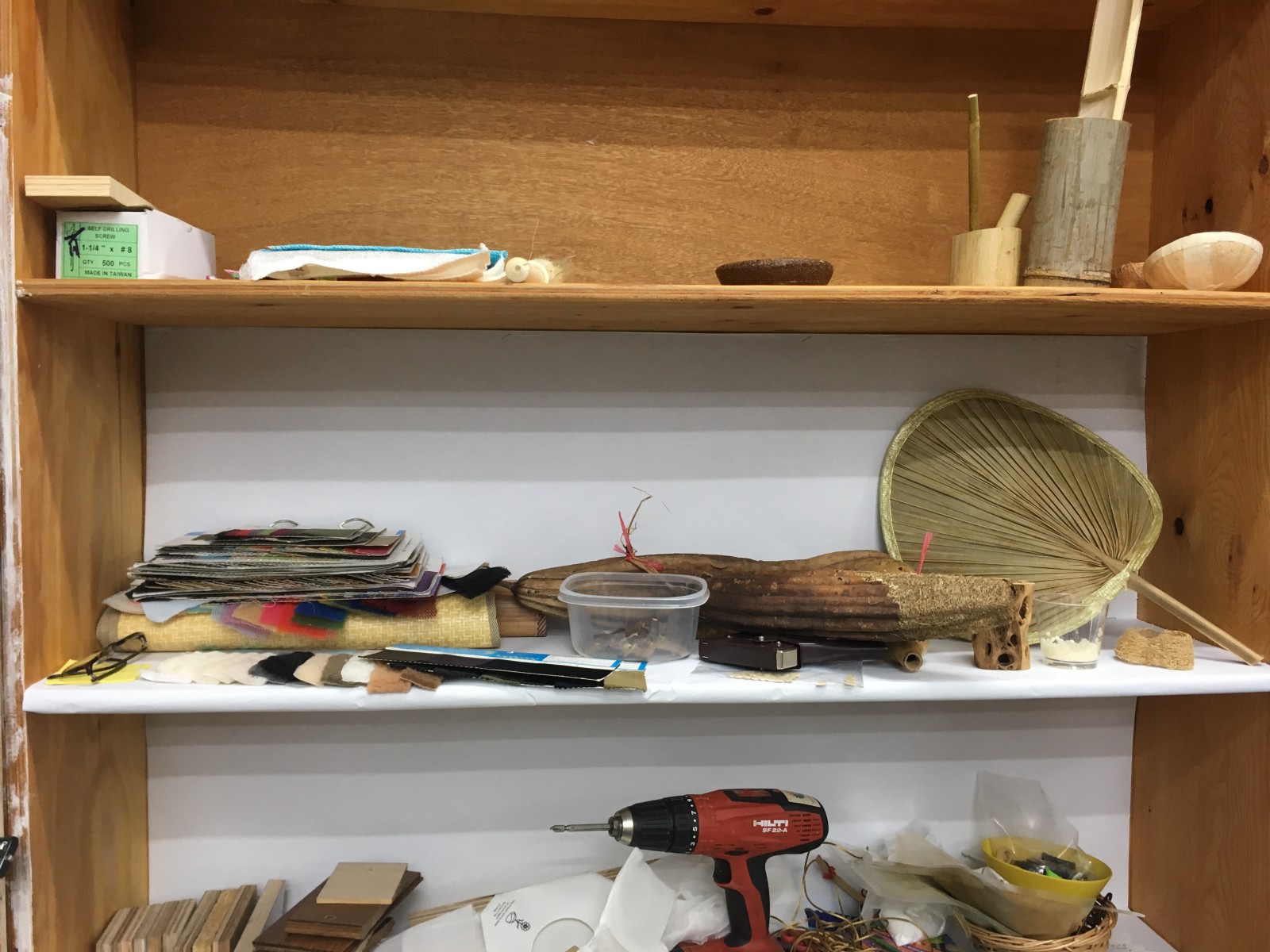 This is the mushroom, as some students and interns are starting to test it. The idea of growing e.g. your own chair seems too fun not to try at some point. 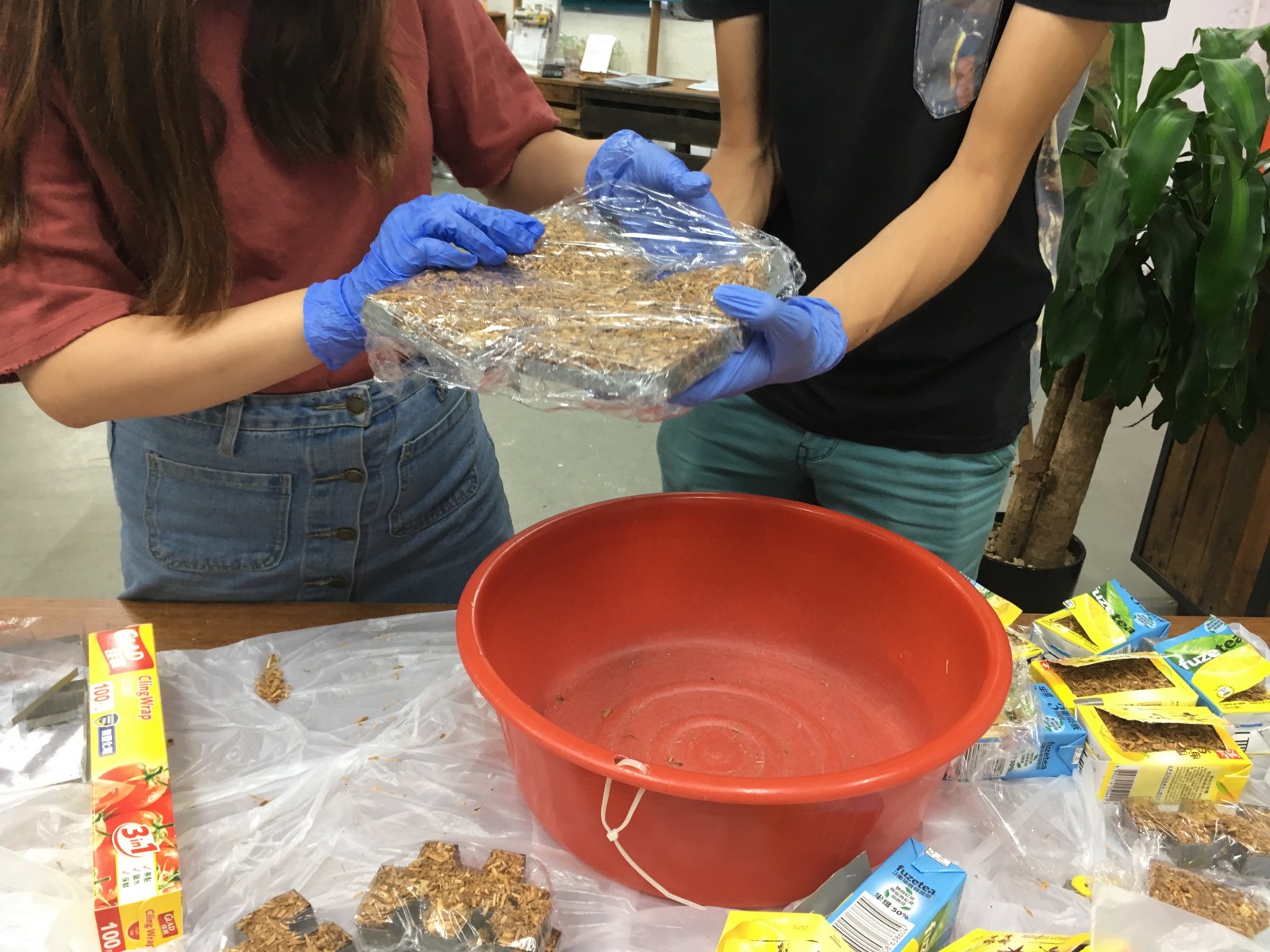 Children are welcome too as the organisation offers tools and benches adapted to their size. As makerspaces are scarce in Hong Kong (real estate price madness), it is important to provide a space for education and have a more general audience than new startups. 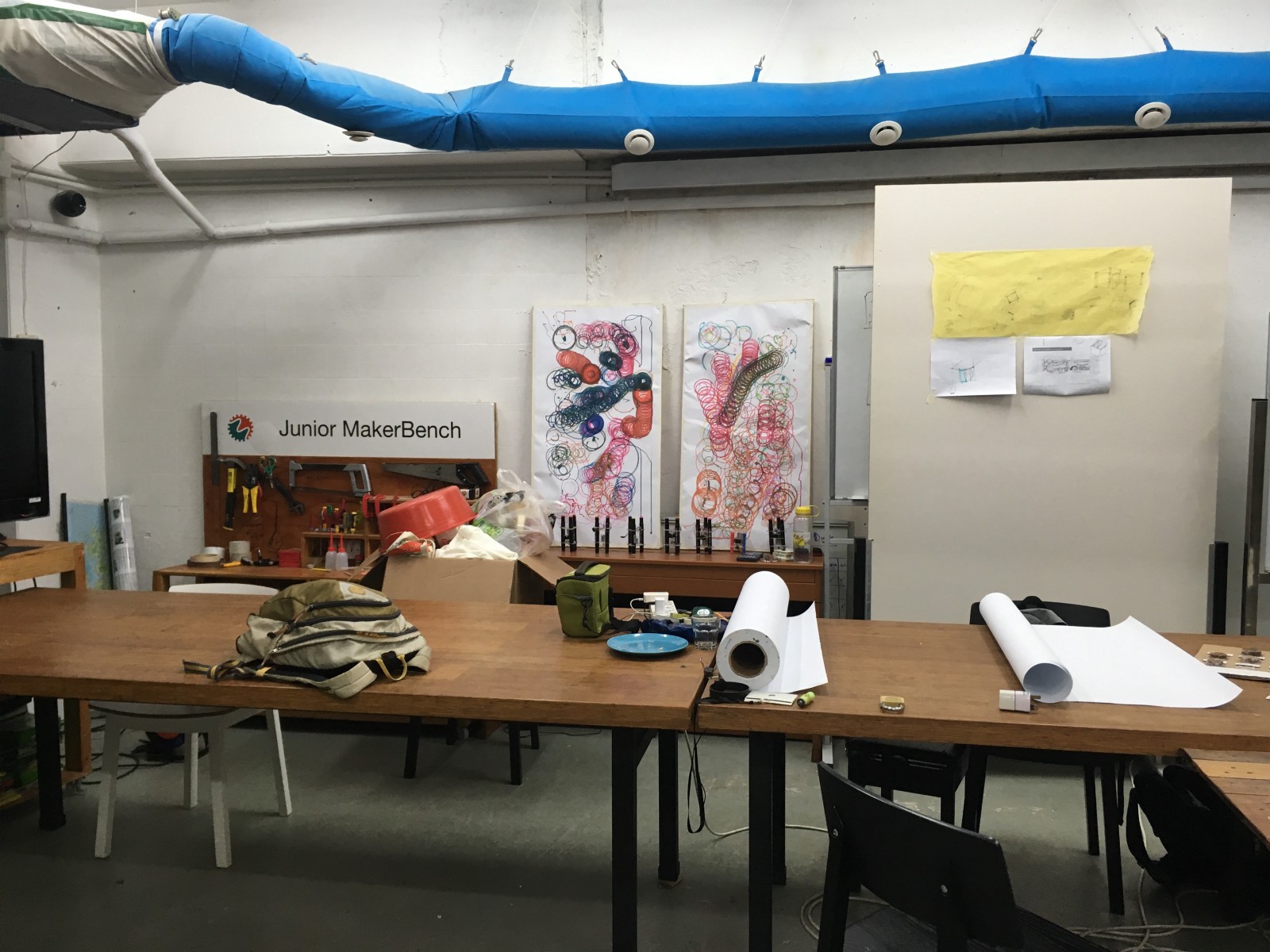 And to wrap up my rapture, this was the view from where we winded down afterwards. The beach was actually much less glamorous than this, but unusually quiet for the city, which fit very well to our very tired group. 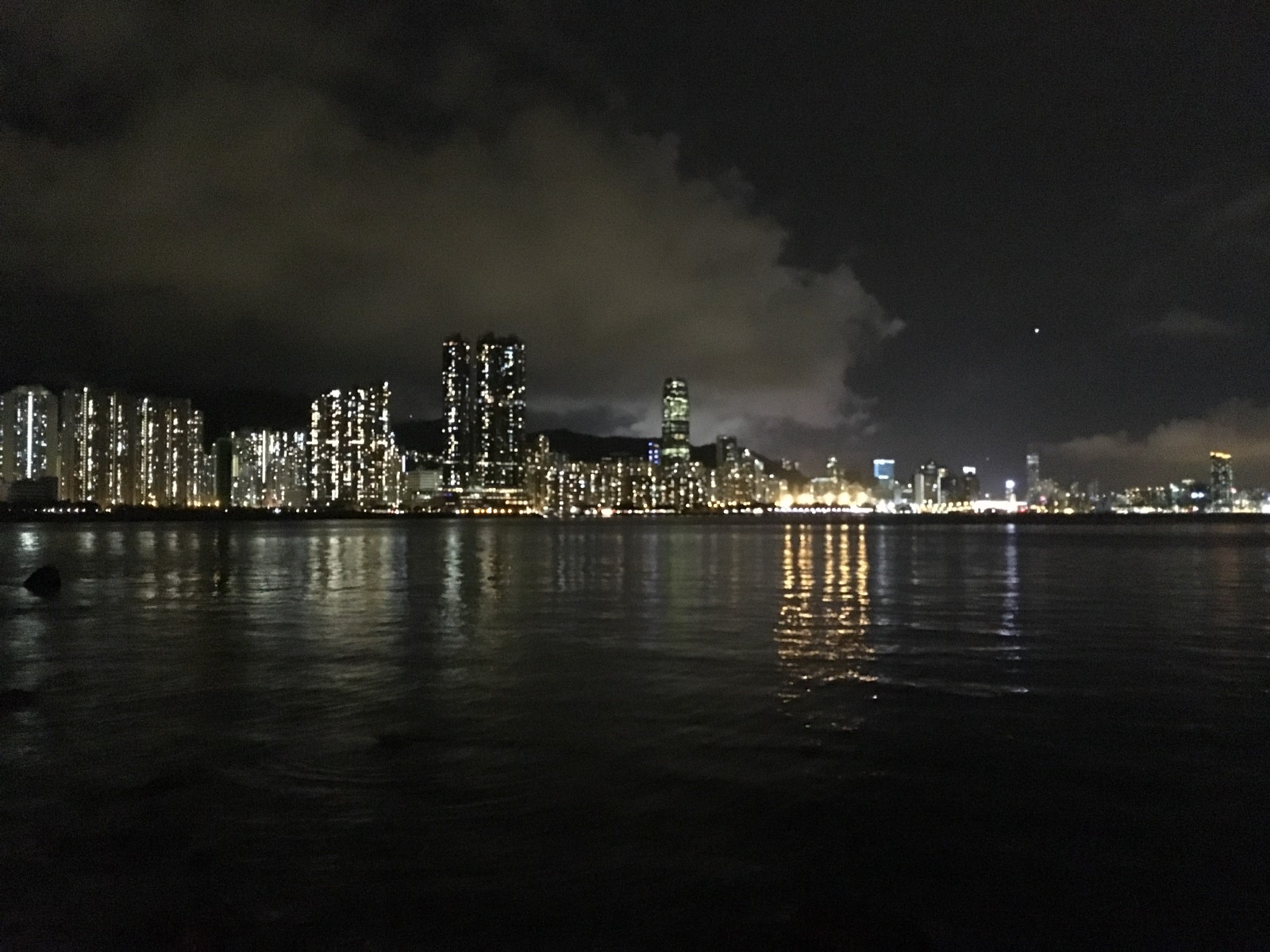